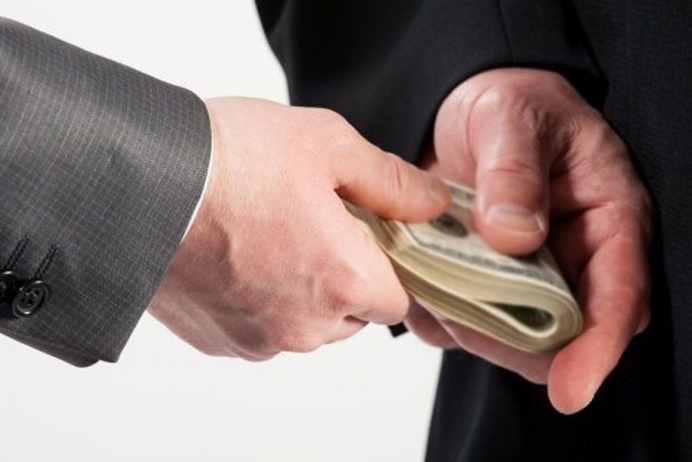 Two months have passed since the release of the report titled “OHCHR Assessment of human rights concerns in the Xinjiang Uyghur Autonomous Region, People’s Republic of China” by the United Nations High Commissioner for Human Rights. Following the report, the 47-member UN Human Rights Council voted. The decision was on whether to debate the report, but it appears China’s lobbying efforts were successful, and the horrifying study will now be discarded. There were 19 votes against 17 and 11 abstentions. Even more terrifying is the fact that of the nine Muslim countries present in the council, only Somalia voted in favour of debating the report, while Indonesia, Sudan, Pakistan, the United Arab Emirates, Qatar, and Senegal voted against it, and Malaysia and Libya abstained. What is the purpose of this report, and what does it reveal about the Uyghurs and other Muslim minorities in China?

According to OHCHR, the study was sparked by an increase in reports of missing persons in the autonomous region of Xingang. Since 2018, the council has attempted to collaborate with China to obtain information on the matter, but its formal investigation began in March 2021.

There have been reports of missing people and increased awareness of their situation since China’s crackdown on minority Muslim groups. Several online platforms for reporting missing family members have been launched. Many of these, however, appear to be funded by Western countries that have been particularly critical of China. As a result, some people question whether the allegations are a political ploy by the West against China. It makes no difference whether the west uses this card or not. The agony is real! Unfortunately, the victims are Muslims who are being used as pawns by non-Muslims.

The report described the Xinjiang Uygur Autonomous Region (XUAR) as China’s largest region, with a lot of mineral resources, borders eight countries and with 25.85 million population has a majority of Uyghur and other minorities from majorly Muslim Turkic ethnicities. The region was ‘acquired’ by China in 1949, and it was marginalised for a long time until recent times when China tried to develop it.

China invaded and annexed the area now known as Xinjiang in 1949. This is an extremely rich and strategically significant area. Sunni Muslims have lived in this area for centuries. However, it is astonishing that the UN still recognises the territory as part of China despite China taking it after the 1945 chapter of the UN that says no to conquests.

According to the report, since 2014, China has conducted a “Strike Hard” campaign on what it sees as terrorism and religious extremism. However, it appears that Chinese documents do not define in concrete terms what terrorism or extremism is. Thus, anything and many things can be branded as a sign of extremism.

Undoubtedly, some individuals in the region have demanded the independence of the Xinjiang region from China and the restoration of the 1944-founded East Turkistan nation. However, China has labelled the separatists as terrorists in an effort to maintain its ‘entitlement’ to this region, and it actively seeks to undermine any cultural or intellectual effort anyone makes to distinguish themselves from non-religious Chinese. Like others around the world, many Uyghur Muslims joined the ISIS campaign, which may have exacerbated China’s fear. Hence, it resolved to eradicate everything in the Turkistan region from the ground up in order to prevent any potential threats to its hegemony in the region.

The report states that China’s “anti-terrorism legal framework” has one of the vaguest purviews imaginable. In effect, it transforms legal forms of protest and authentic religious practice into terrorism. In fact, the Xinjiang Religious Affairs Regulation (XRAR) defines “religious extremism” as “the distortion of religious teachings and the promotion of extremism, as well as other extremes of thought, speech, and behaviour, including the promotion of violence, social hatred, and anti-humanity.”

Insanity lies in the belief that a government founded on godlessness will have a good and fair regulatory board on religion. It is easy for a sane person to read between the lines that China’s legislation specifically targets Muslims. We find from the report that the Chinese government formally deems the most fundamental Islamic tenets extremist.

According to the report, the XRAR does not only prohibit extreme ‘ideals’, but it also prohibits ‘extreme’ thinking, clothing, symbols, signs, and content. Thus, a broad 75-sign rule of extremism is made public. It is unfathomable that maintaining beards, quitting drinking and smoking, refusing to interact with others who drink and smoke, not attending football and singing competitions, not watching TV, wearing hijab, closing restaurants during Ramadan, and so many other basic things made this list. In fact, it is terrorism to advocate these ideologies or to download/share books, audio, or video materials that support them.

Sadly, this is quite true. China passed legislation that classified many of the things taught in our mosques as acts of extremism, creating its own interpretation of Islam. China literarily wants Muslims to commit haram in order to prove that they are not terrorists. It also creates a barrier between Muslims in the East Turkistan region and the ummah because it is a punishable offence to even listen to basic Islamic teachings over the internet, as teaching it is a crime in the territory. If these implementations continue, one wonders if Islam will still exist in the region in a few years.

According to the report, to appear humane, China claims it makes ‘culpable people’ to choose between going to prison or Vocational Education and Training Centre (VETC). However, interviewed induvials stated that such choices were not given and that everyone is taken to the VETC. China also claims that the VETC are flexible education centre (of which it has conducted some false promotional videos). However, it appears that anyone that goes there does not know when he is coming back, and their families are not even informed.

Like in other cases, China has always tried to cover its atrocities by creating concocted terminologies. In order to appear harmless and to take advantage of their captivity, China chose to construct what it termed Vocational Education and Training Centre. It showcases this as a centre of vocational studies, whereas it is actually a slave market where everything is done to the people, who never get to choose to stay or not. The centres are horrible that only reminiscences the inquisition court against Andalusian Muslims.

According to the research, these camps created for deradicalisation and re-education have grown over the years. The Chinese government have always tried to make propaganda videos to promote these facilities to the world, but these camps are not what it shows. They are stiff facilities guarded by armed men. People are beaten with batons, interrogated on ‘tiger-chair’; water poured in their faces, they are never allowed to observe worship with guards always on the look, and they cannot speak their language. Instead of all these, they are made to undergo political teachings in allegiance to the Chinese government. They underwent some medical administration. They were given pills, injections, and their blood samples were taken for unknown reasons. Women complained about sexual violence and some instances of rape in private rooms. 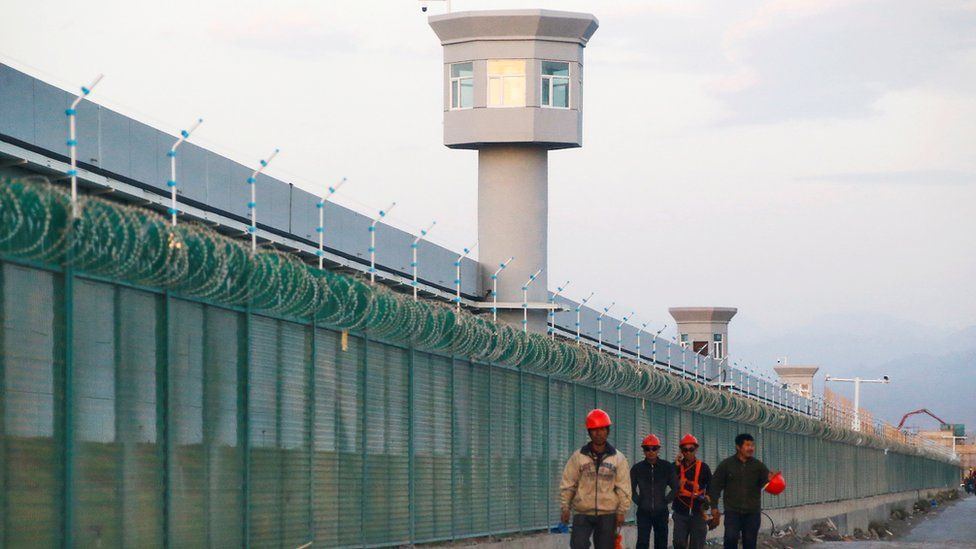 One of the detention camps. Source: BBC

China’s ‘detention camps’ have been a topic of discussion for a while. BBC and some other media houses have tried to get information about it in the past, but it seems none has been able to capture it in detail as this report did. There is no doubt that when people want to turn off the light of Islam, they employ the most extreme and strange methods. Like in Andalusia, USA, and Israel, China has also constructed its own form using its terms to ensure people leave their religion and follow their godless way. And in fact, making material gains out of them.

According to the report, the vocational camp is a feeder for the manufacturing industry. The ‘graduate’ of the camp is taken to the factories to work.

Although China would want the world to believe that it is engaging in some ‘skill acquisition programme’ or whatever name it may love to give it, it is engaging in forced labour- slavery. Unfortunately, because of this slavery, many intercontinental companies situate their factories in China.

According to the report, China has destroyed many Islamic heritages, including bringing down many mosques and removing the minarets of others.

The kuffar have always had a hard time accepting the signs of Islam since they are evidence of Islam’s long history and the widespread presence of Muslims throughout the world. So, based on its well-known assimilation practice, China aims to eradicate any signs of Muslim existence, including stopping Muslims from speaking their languages and reading their sacred scriptures.

According to the report activities of Muslims are being tracked. China also launched a project called “Visit the People, Benefit the People, and Get Together the Hearts of the People”, where its 1.1 million officials are sent to visit and stay over in the houses of the Muslims. During these mandatory visits, the officials dine and wine with the family and try to brainwash the children.

This is indeed very strange, as no civilised society has any concept of a forced visit. However, China has adopted this as a medium to track down Muslims, distract them from their deen and set their children against them.

Just as some parts of the report, like reproductive rights, intimidation, family separation, and incarceration of scholars and intellectuals, which we have not to dwell on, there are surely many things that may not be captured in the report. Everyone who claims to be compassionate, irrespective of their religion and ethnicity, should recognise these evils and speak out against them. However, it is unfortunate that we live in an unjust world where the rich and powerful nations do and undo.

The UN report shows that China indeed engages in all these things and makes them legal within the framework of its law. This confirms what many escapees have narrated over the years. However, sadly, it seems no one is capable of holding China to account, being an economic power. It has tried to undermine this report at the UN human right council just as it has sugar-coated many accusations against it.

For the sake of doubt, if China is sincere as it claims, let it allow the Muslims in Turkistan region to communicate with their brothers worldwide. Let them invite famous Muslim speakers and let them be able to travel freely for advanced Islamic education! But will China allow this?